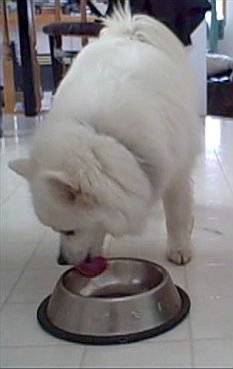 There are so many options for feeding our dogs. Commercial kibble diets, canned food, raw diets, homecooked diets, and now dehydrated and freeze dried dog foods have entered the mainstream pet food stores. What are they, and what are the benefits and drawbacks of feeding them to our dogs?

This article may contain affiliate links. When you purchase through links on this site, I may earn a small commission at no extra cost to you.

The Difference Between Dehydrated and Freeze-Dried Dog Foods

Freeze-drying is a form of dehydration. Dehydrated and freeze-dried dog foods

are similar in that they both start from raw ingredients, which then have the moisture removed. Neither process uses chemicals to remove the moisture.

Dehydrated foods have the moisture removed using a high-heat process. Hot, dry air is circulated around the food in order to dry it out without actually cooking it. The heat may alter the taste, texture, and nutrients in the food. Some vitamins and minerals break down during the dehydration process and retain less nutrients when compared to freeze-dried foods. Dehydrated dog food is usually harder than freeze-dried food and takes longer to rehydrate. They are typically rehydrated with hot water.

Freeze-dried foods use a low-heat process. The food is first frozen, then the moisture removed with low heat, then sealed. The process acts as a preservative so nothing else needs to be added. The low-heat process preserves the natural taste and most of the nutritional value of the food. There are still some vitamins and minerals that will break down even in the low-heat process, and will retain less of their nutritional value when compared to fresh food. Freeze-dried dog foods can be prepared with either hot or cold water and some are ready-to-eat in just a few minutes.

In either case, you'll need to look for a food that's a complete meal. Read the fine print; there are many types of both dehydrated and freeze-dried foods

that are meant for supplemental feeding only, rather than complete nutrition. Both dehydrated and freeze-dried foods are considered healthier than feeding kibble.

The Pros of Dehydrated or Freeze-Dried Dog Food

The Cons of Dehydrated Dog Food

Where To Buy Dehydrated Dog Food

Many pet health stores carry dehydrated dog food, in many varieties. Dehydrated foods can have very different textures - from soupy, to oatmeal-like texture, to a more chunky, stew-like meal, or even patties or nuggets. Some dogs are very fussy about texture so try a small package first. The staff may be able to give you some feedback about texture and taste based on what their customers have been telling them. You can also buy dehydrated dog food online

You might have to experiment with amount of water and rehydration time, to get the texture that's right for your dog. Lots of pet owners turn to these types of foods because they want to feed as close to raw as possible, without actually having to deal with raw food. Remember that raw food naturally has a lot of water in it which is good for the dog... so don't feed dehydrated foods "dry". Always rehydrate!

Be sure to talk to your vet before changing your dog's diet if your dog has medical issues.

Gradually incorporate dehydrated or freeze-dried food into your dog's diet until you're sure that he's able to tolerate it. Consider rotating different flavors; dogs enjoy variety too, and mealtimes are probably one of their favorite parts of the day!