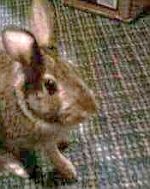 I have an amazing, but sad, story of true bunny loyalty in the most unlikely form: a Cottontail rabbit.

After a year of keeping Brownie in my house, I released him into my backyard, expecting never to see him again. Cottontail rehabbers said it was perfectly fine to have my rabbit released at that age, since surprisingly they already have all the skills needed to survive.

Amazingly, my rabbit returned constantly, seeking my companionship (even though there were at least three other Cottontails my rabbit was commonly seen with). This went on for a full month, but was tragically cut short due to a terrible turn of events.

First things first, if you didn't know, Cottontails have the highest death rate of all wild baby animals taken in by shelters. Even in expert hands, they only have a 37% survival rate.

The fact that I raised my little Cottontail from infancy to adulthood, with no help from any specialist except rabbit books, was shocking to say the least.

Raising him was very difficult, but in our time together, we formed an unusually strong friendship. For me, it was based on my deep respect for Booboo. I was always reluctant to do anything that might upset him in the in the tiniest bit, because earning his trust took so much more time than it would have for a domestic rabbit.

For Brownie, our friendship was based on his deep trust of me. To earn the trust of a Cottontail is truly a rare precious gift, because so little of them would ever give it to you. Thinking of his trust almost brought me to tears just now.

European rabbits are the ones that were domesticated. Attempts to domesticate Cottontails failed due to their fearfulness. Many say that they can never be really tamed and will always fear you, no matter how much socialization you put into them.

My Brownie was considerably tame and even learned a few tricks. What he could never learn was to be house-trained.

We let him loose in the house most of the day, and so after I released him outside, the carpets from our entire basement and upstairs living room were replaced.

I did release my rabbit, but Booboo never really ever left.

I remember that last one summer month clearly, because every day that Brownie visited me was a blessing. His visits were always consistent and plentiful.

Wild rabbits are naturally very intelligent, and Boo was up among the elite in that area. Every third day, he'd come and spend the whole day with me on my lawn. No matter the weather, if it was our third day meeting, that rabbit was there.

One time, I missed one of our meetings. I was very disappointed, because surly my rabbit was upset with me now, and plus I wouldn't see him for another 2 days.

I was wrong. Brownie was there the very next day, waiting patiently in the yard. He wouldn't miss a day with me!

One day (the day that started the rapid downhill fall), Brownie had a tick on his neck. It fell off by itself (I had never seen a tick before, so I didn't know how to take it off at the time), but his neck was left with a small bloody spot.

I expected this to heal, as it was not that big. However, almost right after the tick was gone, a rival male rabbit bit him right where the tick had been during a fight.

After that, I believe a parasite or black worm crawled inside his wound, growing bigger and bigger each day. The thing was literally bulging out of his neck, and all my attempts to carry Brownie into his cage to take to the vet was to no avail (Cottontails especially hate being picked up).

My rabbit continued visiting me, and the visits became more frequent as he grew weaker. Eventually, sadly, he became fed up with my constant badgering to try to get him into his cage.

He gave me one look that sighed: "My friend, not now, okay?" as if I were only a small child trying to play an especially annoying game with him! Could he not see his life was at stake?

He disappeared under my fence, and that was the last I saw of him. I marked that day on my calendar (I had been keeping track of my rabbit's visits, especially after his neck wound): August 15, 2011.

Brownie was a Cottontail, and he was a rabbit - not a dog. But the loyalty he clearly showed to me, and our true friendship, I will never forget.