The Chinchilla and the White Wolf 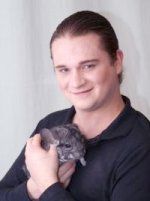 I was about five when I first saw it. My mother, my sisters and I were driving in my mother's mini van to Idaho Falls. It was either December or January, snow was on the ground but the roads had been plowed and sanded. Somewhere between Boise and Twin Falls, I saw a big white wolf standing next to the road. The wolf stared right at me, it's eyes were golden. It looked at me like it just knew. My mother never saw the black ice and the minivan lost control, crossed the median and hit a pickup truck head on. None of us were harmed and other than some small pieces of glass in my sister and my mother's hair, there wasn't a scratch on us.

I was eleven when I saw it the second time. I had been climbing a vine in South Carolina. I was about twenty or so feet in the air when the vine snapped and I fell headfirst to the ground. Before I passed out, I saw the white wolf standing next to me. I had cracked one of the vertebrae in my neck and had to wear a neck brace for two months, but otherwise I was fine.

I was eighteen the third time. I moved out of my parent's house the day I graduated from high school. I had this great idea that one could live off hot dogs and ramen for eight months. You can't. Kitty came home to find me passed out on the living room floor. Blood tests said I had a rare form of leukemia and that malnourishment triggered it. I had to move back in with my parents for a couple months. As Eric and Kitty helped me into Kitty's car, I saw the white wolf standing across the street. Kitty and Eric saw it too. The doctors speculated on how bad my illness would get, how long before I couldn't walk, how long before I would die. They speculated three to six months. I was eighteen, now I'm twenty five.

In my senior year of high school I worked for a small private zoo in Nampa. I had the opportunity to work with many animals there and I learned so much. My greatest passion was nursing baby animals back to health.

One day I was browsing at a store and I heard the clerks talking to each other about an incident that happened. Somebody had decided to illegally purchase two wild chinchillas from South America to raise as a breeding pair. The chinchillas were improperly shipped into the States and sadly, because of this, both of them died. Even worse, the female had given birth on the trip and the clerks had the baby in the store and had no idea how to take care of him. To this day, I have no clue how he ended up there. I told them about my experience with animals, how I was raised on a farm and had raised foals, calves and even baby hawks and killdeer at times. I told them about how I had worked at a zoo and how I had raised many different varieties of wild animals there.

After a novel of paperwork and licensing fees (due to the fact that he was not domestic) I was given this tiny baby boy chinchilla. He was so small that he fit in the palm of my hand, his eyes weren't even open yet. He was only two weeks old. Every four hours he had to be bottle fed. I kept him at my Grandma's and every day I would come over and feed him. At night I would set my cell phone alarm on vibrate and put it next to my ear and wake, every four hours, to feed him. I never told Kitty. I wanted him to be suprise.

By the beginning of December, the little guy's eyes opened and he was weaned. I bought him some special chinchilla food and a water bottle, he couldn't just have pellets like domestics, his stomach didn't digest them. I was the first thing he saw when his eyes opened. Those brown and black eyes. Though he was small, and though he was just a rodent, when he looked at you with those eyes, he knew you. From that day on, I was a father to him and to me, he was a son. He never knew he was a chinchilla and so he was capable of amazing things. Like a bumblebee, by all scientific theory, they should not be able to fly. But they do, because they don't know otherwise. By Christmas he knew his name, he came when he was called, and he would roll over and play dead for raisins and dried bananas like a tiny dog.

On Christmas morning I told Kitty to close her eyes and I placed him in her lap. The little guy was terrified! He'd never been around so many people. 'Shh. It's alright.' Kitty said. 'I'm your new mom.' She held him close to her chest and he reached up and kissed her with his whiskers as if to say 'I'm your new son.'

Over the next couple of years ChuChu grew and now could fit in both of my hands. He was intelligent, brave, patient, and compassionate. I've raised and lived with many animals but none quite like him. He was like a tiny man. He wasn't a pet. He was a son, a familiar, a guardian, a best friend. Many adventures were had. ChuChu loved to sit in the pockets of my hoodies while I did chores or worked on costumes, he loved chasing the cats in his exercise ball, he loved to be tickled on his belly, and most of all he loved giving whisker kisses.

One day ChuChu jumped in my bowl of broccoli and cheddar soup. I was so worried. Chinchillas are a lot like Mogwais. They're cute but don't ever get them wet and don't ever feed them after midnight. I called every vet in town, asking for advice. By the time I was off the phone, ChuChu had licked all of the soup off of himself and he liked it very much. Another time, I opened a can of Mountain Dew, the can sprayed all over and a puddle formed in ChuChu's cage. He drank it before I could clean it up and he was so hyper! He ran on the walls of his cage like a little motorcycle in a steel ball at the circus. Kitty and I laughed and laughed.

Over the years, ChuChu learned to love people. He was always happy to see people even if he wasn't feeling well. He helped many people through difficult times, his whisker kisses were as magical and as healing as a Phoenix's tears.

When we came home this past November I noticed that ChuChu wasn't feeling well. His ears were down and his coat was dull. I gave him a dust bath and brushed him but he just didn't seem to perk up. He was happy and active, but there was some dullness about him that wasn't there before. The next day his nose was running and his eyes were gunked up. I'd never seen him looking that sick before. We moved him to our room where the space heater was. I called his vet, we talked to the people at the pet store. Speculation was that it could be an allergic reaction to his pine bedding so we switched to aspen. But he did not get better. We thought maybe it was too cold in our house with the furnace being broken so we moved him to Grandma's. But he did not get better.

The vets said to give him a few weeks and if he was still sick to take him in. In the beginning of January, ChuChu got better. He no longer had a runny nose or goopy eyes and his coat was shiny and his ears perked up. But then last week, he got worse. He lost weight and his nose and eyes were running again. When I took him out of his cage to clean it, he didn't run around the room like he usually does. He just stayed at my side and looked up at me.

I took him to the vet immediately. He had lost half his body weight and was dehydrated. The vet put him in an incubator, they gave him a cathetar and IVs and he stayed at the clinic until Wednesday afternoon. ChuChu fought valiantly for his life. Just like when he was a baby, he had to be nursed.

He looked better on Wednesday but he was still weak. ChuChu was doing a little better, but when I put him in his cage he fell down and didn't get up. I started to cry. Kitty told him 'get up Chu, you can do it!' ChuChu looked up at her and I have never seen any living being, human or otherwise, with such determination in their eyes. He struggled to his feet. He fought so hard. Kitty took him out of his cage and held him on her lap and he slept for about an hour while she sang to him. We put him back in his cage and went home.

Friday I went over to Grandma's to visit him. She had been taking care of him since both Kitty and I work all weekend. He looked great and he showered me with whisker kisses, I was sure he was going to be okay. Yesterday morning I saw Grandma's car pull into my work. I knew that ChuChu had died. I had to hold in my sadness most of the day and it gave me a splitting headache. I didn't cry until later that evening. I felt so lost, so confused.

This morning I woke, my headache was worse and my whole body felt heavy. I walked to my truck slowly. As I left the yard and headed down the sidewalk, something to my right caught my eye. Under the streetlight a few blocks away, in the falling snow, was the big white wolf with golden eyes. I gasped and ran to the wolf. I wanted to know after all this time what it was and what it meant. I stumbled and when I looked up, the wolf was gone, but it's prints were there in the snow. Clear as day. I closed my eyes and smiled and raised my head up to the falling snowflakes. I knew then that ChuChu was well, wherever he was, and I knew that he was still with me. I realized then that the entire time that ChuChu was alive, I didn't see the white wolf. Not even once.

Thanks to Brandon Waite of Idaho for sending us this story.