She awoke feeling as rested as a pup after a long nap; she stretched, stood and the lush meadow of clover beneath her paws felt velvety. She did not understand. Nor did she grasp the beauty all ‘round her for she'd been without vision for five years, although images did come to her in dreams. Often she'd been disappointed upon waking — she'd never given up hope that one day her sight would return.

Woofs and yaps could be heard in the distance, as well as song birds, even sounds never heard before. The babbling of a brook caught her attention for she was thirsty; she started in that direction. With each step she walked more quickly and with a spring in her step she'd not had in what seemed like eons. Confidence finally overcame her and she sprinted toward the sound of water. What joy to run again! Now and again she turned to complete a circle at full speed for the mere thrill of it.

Yes, her sight had returned! To see her reflection in the sparkling water was proof. This time she was not dreaming. She lapped at the cool water and caught sight of beautifully hued fish playing chase several feet below the water's surface.

Shiloh gazed about in search of her mom and dad. She'd never been allowed free rein except in the backyard and she began to feel uncertain about such freedom. What if she wandered into danger? No sooner had her anxiety set in than two snow-white doves landed beside her. Aha! Something familiar at last—the trees at home were full of doves cooing while she spent time in her backyard. Though she had never understood their calls, this time she did. They beckoned her to follow them as they flew a few feet above her.

Looking up as they took flight, a brilliant rainbow caught her eye; it glistened as if each color was configured of precious stones. Very soon a bridge appeared. It was an old fashioned arched, stone bridge that glinted with gold and was bedecked with green garland. The woofs and melodies of birds were much closer now. She'd heard those melodies before, they were Christmas carols!

Only a few paces onto the bridge, the yapping that only a schnauzer can create came closer. Shiloh watched, and in moments Josey raced to her side and showered her with an abundance of welcome kisses. Josey wore a red ribbon about her neck with a tiny Christmas bell attached; it tinkled with each movement. Soon they were into a game of chase and wrestle; the games they had played before Josey passed from her earthly home. Shiloh then realized she was at Rainbow Bridge—her mom had described it in detail for weeks as she became weaker, and it was paradise beyond belief.

Communicating as only canines can, Josey introduced her to family members that had come and gone before her. Festus greeted Shiloh with a high five, the first schnauzer that had begun Mom and Dad's love for the breed; Tiffany who had come next, gave big kisses. Maggie and Jack, who were Mom and son, approached with loving nudges and wagging tails. To Shiloh's surprise two tiny Yorkies appeared—Fang and Fancy! Yorkies, my folks had Yorkies? They greeted her with love just as the others, and then came Greta; a cousin that greeted her with true delight and even more kisses. In her new home she had a huge family and her angst began to melt away—although she'd always miss Mom, Dad, and Hank.

Shiloh's new-found family seemed to know much about her. She inquired, wondering how that could be. They said they'd been with her mom and dad the day she was chosen from all others, and had even influenced her being selected from the litter of six. They had known that she would experience many medical problems and required a home where her needs would always be met. Always!

The pack revealed that Rainbow Bridge was forever glorious; but at Christmastime it was breathtaking to behold as they celebrated the birth of Christ, the One who had created domesticated pets and given them the ability to establish an extraordinary bond with their humans.

Decorating for the upcoming celebration was underway and Shiloh was in awe. Red birds, blue birds, and white doves perched in trees—live ornaments! Spiders of all sizes spun golden webs of garland ‘round and ‘round the trees. Even fire flies twinkled in the branches reminding Shiloh of the trees her mom had decorated when she still had sight to admire such things. The weather was mild, sunny and the few clouds shimmered silvery, yet the trees were covered with snow. How could that be? In unison the group proclaimed, "All things are possible at the Bridge."

Trees of all size were decorated, but none were trimmed in the same manner. Covered with iridescent snow, a stately scotch pine stood dressed with butterflies, wings aflutter, displaying a magnificent array of color. Their fluttering caused slight movement of snow to enshroud the tree with luminous motion.

Oh, but then! Knowing how her mom loved poinsettias, Shiloh took note of a huge fir tree filled with vast red blossoms, along with goldfinch, and thousands of fire flies. In fact, all about were gardens of poinsettias. Squirrels busily cut only the most perfect of blossoms while larger species of birds picked them up, flew into the trees and placed them in position. Tiny dog-breeds and kittens played hide and seek among the enormous red plants, causing them to sway to and fro as if dancing in a mild breeze.

By day's end the reunited family was ready for a good night's sleep; tomorrow was Christmas Eve. Shiloh could only imagine what wonder lay in store the next two days. After a hearty, warm meal, the pack showed Shiloh to a new fluffy bed adjacent to theirs. It was plush like nothing she'd ever experienced. The family group told of how grand golden eagles soar into the skies to select the proper size cloud for new each new arrival's bed. She snuggled in. Once comfortable, an angel approached and whispered, "I'm Dana; and I will always be nearby, Sweet Girl." She gently placed a coverlet, adorned with pink lace, across a now-healthy, restored body and vanished as quickly as she had arrived. Shiloh thought to herself, "Dana! She's my aunt and Mom's niece. Greta was her puppy… now I know I'm truly safe forever." She sighed. 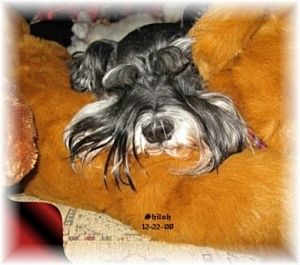 As Shiloh drifted into sleep, she heard song birds softly singing her mom's favorite Christmas carol—The Littlest Angel. She knew it was meant just for her, what with it being her first night at Rainbow Bridge ... for Mom had always called her a little angel ...

Shiloh slept well and only woke once to roll over. Without opening her eyes, she heard a choir of angels serenely sing another carol her mom and dad often played…I'll Have a Blue Christmas Without You. Tears slipped through her still closed eyelids and she prayed her earthly family would heal quickly. Again she nodded off into peaceful sleep…and she dreamt of the day she would sprint to the bridge and joyfully escort Mom, Dad and Hank to the other side. Until then she would play... and rest... and romp... and nap... ... ... and wait...

My hope, and Shiloh's as well, is that her story might bring comfort to those who have lost a beloved pet, a family member, during the Christmas season.