My son, Matt, is "gloriously" autistic. Like many autistic people, he has "serial obsessions". When Matt was about 15, out of nowhere he developed an intense fixation on hairless dogs. We had never had a dog. I had nursed an active distaste for dogs all my life.

My husband and I are both cat people. We did NOT want a dog, especially a hairless one. But there is a saying in the autism community - "There is no force in the world as irresistible as an autistic person who wants something..."

After 2 years of constant pleading and harassment from Matt, we finally broke down and agreed to get him a hairless puppy. Matt had some simple but very clear criteria about the dog he wanted. It had to be a male and it had to be a hairless Chinese Crested dog. It was so important to him it was almost like Matt was looking for an alter ego.

I knew next to nothing about the Chinese Crested breed and cared less. I dragged my feet about looking for one and hoped the whole dog idea would fade. Not a chance. Matt then proceeded to do something I would have sworn was impossible. He located a breeder on his own with a puppy he wanted by going to dog shows - an incredible feat in itself for someone with his communication challenges.

The next thing I remember was driving 2 hours on a snowy, treacherous November Sunday in 1994 to the tiny town of Kiel, Wisconsin to pick up what I expected to be the biggest mistake of my life. This nondescript, timid, small, grey and shivering pooch had all the cuddliness of a rump roast.

He had hair on his head, feet and the end of his tail, but his torso was nude. I was really confused when the breeder was adamant that I get the right kind of clippers for grooming the dog. Why would I need to clip a hairless dog? It turned out he had some stray body hair and a 5-o'clock shadow Mohawk that had to be periodically shaved off above his spine.

Also based on the breeder's vague advice, the dog spent the rest of that first winter dressed in dog clothes (the cheapest I could find). We realized later that he hated wearing clothing and promptly licked himself raw around one back leg. Our cat was totally outraged at the dog's arrival. If feline disdain could kill, our entire family plus the dog would have been dead. Things were not going well.

Matt named the dog "Beijing". Matt also promised to feed, clean up after the accidents and sleep with this dog. I nursed the dream of not having to do these things myself. But, incredibly, this dream came true! Matt took all these responsibilities on and fulfilled them (mostly). It did fall to me to housebreak this weird mutt. At least Beijing without a lot of warm fur was motivated by the cold Wisconsin weather to come in quickly after doing his business.

In spite of all the routine things Matt did with and for Beijing, Matt had trouble relating to the dog (or anyone) as a companion. I started to play with Beijing a bit (out of pity) and slipped the dog an occasional treat from supper leftovers (you probably see where this is heading). To my astonishment, incredulity, irritation and horror, Beijing latched on to ME as his "person of choice".

Beijing started to follow me around. It built slowly, but I began to feel like I was under siege. Beijing would watch me as though the CIA had assigned him to keep me under surveillance. At first I was appalled. It was irritating to have a dog "shadow". Eventually, I couldn't even go to the bathroom without canine company.

Not only did Beijing follow me, he was always shoving his wet nose in my hand when I didn't expect it and trying to lick me. I found all these dog habits quite disgusting and tried to avoid them. But nothing discouraged Beijing. He pursued me in his happy-go-lucky doggy way no matter how much I pushed him away.

After a while, I realized that Beijing was slowly wearing away my doggy aversions. I was like a person with a phobia who was being desensitized by repeated exposure. Eventually, I found I flinched a little less when a cold nose was pressed in my hand or a quick lick was laid on my chin.

Matt loved Beijing, but their relationship did not progress much past Matt's initial fixation. In many ways, Matt still viewed Beijing as an interesting object rather than as a companion. Mostly Matt wanted to look in Beijing's mouth and watch his tongue when he panted. It turns out Matt's dog fixation was actually focused on their mouths. Beijing sensed this and set his relationship sights on me.

There is a statute of limitations on how long you can ignore complete adoration. I started looking forward to Beijing's joyful, enthusiastic greetings when I came home. I began to enjoy going out for a walk with him frolicking along. Months passed. Beijing continued to weave himself ever so slowly into the fabric of my life. I hardly noticed the change. I don't remember when I started calling him pet names, but somehow Beijey, woofer-barker, Beij­mutt, and Mutt-let crept into my vocabulary.

Then came the fateful day when I finally realized my life had changed forever. I was standing in the entryway of our home. Beijing was just a few feet away as usual. I happened to look toward him and our eyes met. Our gazes locked and a powerful message of recognition seemed to surge between us. It was such an unexpected shock I almost fell backwards. The message went something like this, "Oh, I see you now understand you are a dog person." It was a mutual message of understanding. I instantly knew it was true. I was totally surprised and unexpectedly happy. At the age of 50 I had experienced a spiritual conversion. A whole new relationship set suddenly appeared in my life. Because of autism, I had developed a brand-new, surprising and permanent case of puppy-love. I now understand why people love dogs.

I now view all dogs with benevolent interest and enjoy being around dogs and "dog people". My best friend raises Scottish Terriers and was totally surprised and happy to welcome me into the dog community. But there will never be another dog breed for me except Chinese Cresteds. Their beauty, elegance, intelligence and wonderful friendly personality are a perfect match for me.

Beijing died suddenly of an internal hemorrhage in July 2001 at the age of 7. Our whole family went into mourning. Just like I was blind-sided by puppy-love, I was totally unprepared for the deep grief of his loss. I have grieved for many pets in my lifetime, but never like this. I felt like I had lost a piece of myself. The pain was soul-deep and lasted for months. Whenever Matt is asked about Beijing's death, he always mentions that it was only 2 months before 9/11. These two events are closely linked in Matt's mind and seem to define pain and sadness for him.

We buried Beijing in the back yard. It was a formal funeral with friends in attendance. He was buried with his most expensive, softest dog shirt and his many dog toys wrapped in a hand-made shawl. He rests there still under a small, granite headstone carved with his name and dates of life.

Matt was frantic with grief, but only for 4 days. Beijing died on a Wednesday. On Sunday Matt came to me and said, "Beijing was in my Dream Last Night". Matt said Beijing told him, "I will always be next to you even though you can't see me. I will help you throughout your life." Beijing seemed to become Matt's permanent and ghostly alter ego. Matt was greatly comforted by this and never talked much about Beijing again.

Over the 7 years of Beijing's life, Matt's hairless dog obsession had segued a bit to include dogs with hair and other breeds. Also, Matt seemed much less fixated on having a dog. To this day, Matt loves to visit dog shows and look at as many dog tongues as time will permit.

My husband and I cried over Beijing, but decided we wouldn't get another dog. This fiction lasted about a week. My husband turned to me one night and said, "how long is this pain going to last?". The next day I started to "just look around" to see if there were any Chinese Crested rescues or breeders with puppies available nearby. We didn't even tell Matt or our daughter, Liz. 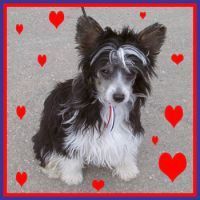 Less than 48 hours later and less than 10 days after Beijing's death, Shanghai was riding toward our home tucked in the crook of my arm as my husband drove. He is a little, black and white powder-puff crested. For those unfamiliar, the powder-puff versions of the Chinese Crested are born with a full coat of hair, often in the same litters with hairless pups. Both Matt and Liz were overjoyed at Shanghai's arrival and promptly folded him into the family.

We got Shanghai from a breeder, but the person that told me about Shanghai's existence referred to him as a "paid rescue". Shanghai was already 6 months old and very cheaply priced. Powderpuff Chinese Cresteds are often hard for breeders to sell because most people want the hairless dogs. It is not possible to breed only hairless Cresteds because of a genetic quirk (I happily know a great deal about Chinese Cresteds now). 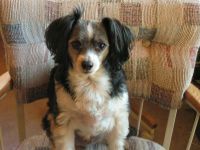 One of the most frustrating parts of getting to know Shanghai was learning how to give a bath to a dog with hair. I invariably put too much shampoo on him and he foams up like he's covered in meringue. But with this dog, such struggles are a labor of love. I'm proud to say Shanghai sleeps in our bed, is spoiled rotten and has been totally loved by all of us since the day he arrived.

But the ache and the empty spot left by Beijing, mine and Matt's first dog, will always remain.

Matt graduated with a degree in Mathematics in spring of 2005. He currently lives on his own in an apartment building that doesn't allow dogs. Matt is content to visit Shanghai on the weekends and asks me to take him to every dog-related show and event in the area. I still can't figure out how Matt finds out about all these events, but he always does.

Story sent in by Nancy A. of Madison, Wisconsin - Still missing Beijing.