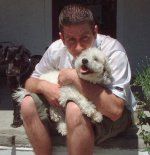 It didn't occur to me when I was pulling into the driveway in February of 2003, that my life was about to change. I walked in the door to find my roommate frantic on the phone with his mother. He pointed to the backroom and said, "Keesha was just mauled by the neighbor's dog!"

"Oh, Dear God!" I thought and ran to the backroom. When I opened the door, my heart sank. Our poor 10-year-old poodle-mix was laying on the cold, concrete floor in a pool of blood, panting. I gasped when I bent down and saw her abdomen beginning to swell. "Leo, we need to call a vet!" I shouted as tears started to flow down my cheek, "She's hurt really bad!"

We were able to get a hold of a vet who had just left his office. "I was just on my way home," he said, "But go ahead and bring her in. I'll meet you at my office." When I scooped Keesha up in a towel, she yelped in pain. Blood covered my hands as I cried harder, "Oh, my Keesha, please don't die!"

On the way to the vet, Leo told me what had happened. He had let our three dogs outside to go potty in our back fenced yard. They always had fun running around in it playing together. Our neighbors had two tiny Chihuahuas in a kennel that they kept in their backyard, along with a huge, 80-pound Rottweiler. He was tied to a stake and often barked and lunged at our dogs whenever they went outside. But a fence separated our two yards and I never imagined that any of our dogs could get hurt.

Keesha is a lover of small animals; puppies, kittens, guinea pigs, anything that she can be a "mom" too. Once, before I had her spayed, she'd even produced milk for an abandoned kitten. Every time Keesha went into the backyard and saw the Chihuahuas, she would whine for them and prance on her hind legs moving her front paws in a begging motion (she will always do this right before she is given a treat).

Leo said that when he went to bring the dogs from outside, he noticed that Keesha wasn't there. He was shocked when he looked out the door and saw her in the neighbors' yard. She had somehow managed to crawl underneath the fence and was wagging her tail as she sniffed the Chihuahuas through their kennel. Leo called for her to come to him but instead of walking in a straight line towards him, she walked at a diagonal. Leo had watched in horror as Keesha found herself within reach of the Rottweiler.

He had attacked Keesha so quickly and with such force that Leo could only watch in horror as he shook her around in his mouth like a rag doll. Our black dog, Buddy, was charging at the fence as Keesha howled in pain, wanting to save his playmate. Leo said he truly thought the Rottweiler would kill Keesha right before his eyes. Luckily, he dropped Keesha into a hole he had dug and loosened his grip. He was about ready to attack her again, but Keesha somehow managed to flee towards the fence. Leo miraculously reached down and was able saved her. All this had happen right before I had pulled into the driveway.

Now here we were on our way to the vet with my poor baby in my lap bleeding, fighting for her life. We took her into the vet and showed him Keesha. He examined her and told us that she had servere puncture wounds under her stomach and the muscles that held her intestines had been ripped part. This was why her side had expanded to double its size. The amount of blood really scared me. "Is she going to be alright?" I cried through my watery eyes.

"I'll do what I can and call you later," was the only reply I received. Leo and I went home and all I could do was sob in my grief. I curled up on my bed and was flowed with memories of Keesha. I thought about when I had first found her. I was in college babysitting for a family I knew. I had worked with the mother at a daycare and didn't think twice when she had asked me to watch her 3 foster children one night. She had told me, before she and her husband left for the evening, to let their collie, who was down in the basement, outside to potty later.

Once the kids had gone to bed, I went downstairs to the family room in the basement and let their collie out the backdoor. It was then I heard this sad whimper. I was shocked to find this foul-smelling, skinny, ratty-haired mess of a dog tied to a cabinet on a 6-inch leash. She sat there looking at me with big sad eyes, unable to move or jump on such a short leash.

"Well, hello there little one," I had said reaching down to let her free from her prison, "My do you need a bath!" After I let both dogs inside, Keesha had jumped up on the couch beside me. She rolled over on her side and waved her arms in a begging motion as if to ask me to pet her.

My heart sank when I began rubbing her belly. I could feel every rib, every inch of every bone in her body. "Oh my god, they are starving you to death!" Keesha just sat there wagging her tail, begging me to pet her more. I could tell it had been forever since anyone had given her attention. Then she did something that made my heart jump. She rolled over and took her paws and covered her eyes as if to play peek-a-boo with me.

I knew this must be a sign from the Heavens that I needed to rescue this little dirty mutt. The only dog I had seen play peek-a-boo like this was my old dog, Honey, who had been killed by a drive-by hit and run car just 4 months earlier. I had been grieving Honey's death, not knowing if I would ever be able to get another dog. Now here I was, sitting next to Keesha, knowing that I must do something to save her.

When the family came home, I told then that I wanted to take Keesha. They acted like they didn't cared because they told me that they were sick of Keesha going through their garbage eating trash. When I asked them how they fed her, they said, "Oh we give both our dogs food in the same dish, but our Collie usually eats most of the food before Keesha gets any."

"Dear God!" I thought, "Are you guys that ignorant to not know that Keesha is starving to death and is only going through your trash because she might just be HUNGRY?" Poor Keesha was being punished because she only wanted food and so she was tied in their basement, not given any love.

I couldn't take Keesha right away because I was living in a place that didn't allow pets. So I took her to live on a friend's farm for a few months until I was able to find a new place and make her a part of my family. The first thing I did was make an appointment for the groomer's to give her a much needed bath and haircut. Then I took her to the vet's to get her spayed and up-to-date with her shots.

For the first four months, Keesha was scared. She often reverted back to going through the garbage, something I patiently worked with her on until she was eating normal dog food. She also never barked and was afraid to play. Within time, she came out of her shell and became a happy, active dog.

I took her all over the United States with me, as I moved from job to job, finding my place in this world. Keesha became my confidante, my best friend, who I cried with after two failed relationships ended, and celebrated with when life was going good. Eventually, I adopted another dog, Nellie, I met Leo, my life-partner, and we then adopted our third dog, Buddy. Keesha always seemed happier as our family kept growing. She loved going for walks, loved getting treats, and loved even more, getting petted. And when she was especially happy, she would do her peek-a-boo paw game with me.

I cried so hard that night, wondering if the last image that I would have of Keesha, would be that of her bleeding to death on the vet's table. But to my relief, he called later that night and said that everything would be fine. Keesha had survived surgery and would be staying at the vet's until the next day. She came home two days later, with her stomach wrapped up, and instructions to give her lots of love.

It must have been love that saved her because she was up and walking in no time. I remember she had only been home for about a week, when I had lifted up on the couch besides me, scratching her ears. Keesha looked at me wagging her tail and when I stopped scratching, she took her paws and played peek-a-boo. It was then I knew that my Keesha was home to stay.

Story sent in by Joplin Sell
UPDATE November 2005: Keesha is now 14 years old, and lives with her owners, Joplin Sell and Leo Cuevas, and her playmates; Buddy and Nellie Mae, and two cats; Chi-chi and Mewshes, in New Mexico. She is also now almost completely deaf but still loves to go for walks... and of course... still plays peek-a-boo.

UPDATE November 2008: It is with a very sad and heavy heart that I find myself having to type this letter. On November 18th, 2008, I lost my beloved dog and friend, Keesha Baby. I can say that I was so lucky to have been blessed to have her for so many years. She lived to be 17 and she was my companion for 15 of those years. Read the memorial, Goodbye My Faithful Friend.