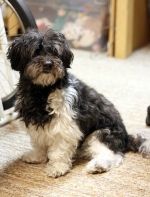 On a warm sunny afternoon one June, my new family inched their way westward on the Long Island Expressway toward LaGuardia airport in Queens NY. Little did they know that we would soon meet their new relative that would forever change their lives. My plane from Tennessee taxied to the gate and I vividly remember how the little nine year old boy's face lit up the moment he saw me and I felt the same about him. We were instantly best friends. They named me Munchkin. I was a tiny four-week-old black, white and yellow Havanese puppy (they soon discovered the yellow was 'number 1', from my trip, and they washed it off).

For Debbie and David it was a day they had longed for but dad did not look forward to it at all as he was never a 'dog person' and had no intention of becoming one. All the responsibilities I brought...walking, feeding, extra expense of a dog sitter at vacation time, being tied down... blah, blah, blah why did we need it. Hmmm, I would have to win him over.

In the beginning I won't kid you it was hard as I ran roughshod through our house. I am sure you puppy owners can relate. I gnawed away the wallpaper, 'dug to China' on my family's upholstered living room chairs, and I made peepee and doodoo in the most imaginative places. Oh yeah, I barked at the wind... a lot.

As time marched on my family and I slowly adapted to each other. I became a big part of David's life and grew up together. I became Debbie's 'shadow'. She was the only mom I ever knew and everyone said it was if she had me on an invisible string. I would not stay in a room unless mom was in my line of sight. If she occasionally went to the Promised Land - Atlantic City - for a well-earned mini-vacation I would wait-up all night inches from the door and when she finally walked in I was so excited I would speed at a zillion miles and hour from one end of our house to the other and then slide ten feet on the polished tiles. At night I would watch TV on the couch between my family and I would jump from chair to chair to coffee table to chair to couch to ottoman... I would eat 'fluffy the birds' seeds to defy my parents and get gently reprimanded for it and of course I would then do it again - I loved the attention.

David taught me how to catch a sock in my mouth. I was really good at it if he tossed it right above me. Ok it wasn't leaping eight feet high for a Frisbee - but I was so proud of my 'trick' and so was my family. When David's cousins visited I let them pet and feed me and I helped them overcome their fear of dogs. One of my favorite activities was greeting visitors to our home by picking up and bringing their shoes into the living room. Of course they had taken off their shoes to not track up the living room. With special friends I would put my head in one of their shoes and run around the house. Somehow I had a mental map of my loving house and never bumped into a wall or furniture.

With the passing of time my Dad actually became a 'dog person' and spent a lot of quality time with me. He was a soft touch at the dinner table and I could always get great people food from him. He often told mom that I made him laugh at least three times a day, and it was true.

The years sped by and the little nine-year-old boy became an eighteen-year-old man and went off to a place they call college. Also, I aged more rapidly than my family, which was natural as the math of seven dog years to one people year worked against me. Somewhere along the line I developed something they call a heart murmur. I did not understand it but I knew I did not feel as I did before. Medication helped me somewhat but my cough and congestion became worse and worse. My parents carried me up the stairs so I would not exert myself and possibly have a seizure. Excitement was not good for me and sometimes made me sicker. My parents kept my doggie treats near the front door so they could quickly calm me when they came home. Even in rain or snow they stopped using the garage and walked around the house and came in the front door to save me getting excited until I saw them. They made many adjustments for me.

My best friend David finished the first half of his sophomore year of college on December 17th and he drove home that night for the winter recess. He pulled into the driveway at 7pm and when he came in the door I greeted him and felt like the happy puppy who came into their lives a decade before. I kissed David and of course brought both his shoes into the living room.

That night I somehow gathered the strength to jump up onto my parent's bed and I lay on my dad's feet. I found it very unusual when he moved around a bit and I did not have the urge to jump off the bed as I had thousands of times through the years even if he moved a tiny bit. I stayed there for ten minutes and then slowly made my way up the middle of the bed between 'mom' and 'dad'. I lay down close to them as it made me feel safe. A few minutes later they were weeping in each other's arms and soon David was as well but they were also somehow relieved that I did not suffer. I am at peace now and as I look down I see how deeply they feel losing me. How quiet the house is. The void of not being together. I love you, family, and I know you love me. - Your little Munchkin. 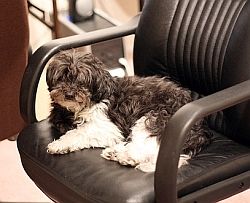