"This story is about the final days of my little boy, my best friend and companion, Kramer. Kramer had always been one of the sweetest dogs there is. He made friends everywhere he went, and even those who did not like dogs regarded Kramer as an old spirit and easily returned his love.

Kramer became arthritic in his last year, and despite many treatments, the days of Kramer hoisting his 80 pound frame into a vehicle to join me at work or with friends or even lugging himself around the block were no longer frequent. He was always right there to greet me with a big smile and wag of his tail whenever I came in the house. He would lumber his happy ole self over and lay on his back to receive his much loved chest rubbing. 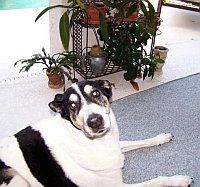 The medicine he took in his final month gave he and I both a chance to experience the younger days. The pain subsided enough so that we could enjoy daily walks together and he could be out and share his beautiful self with everyone he came across.

It was a Sunday when he stopped eating his food and developed a very slight cough, but still he was there for his chest rubbing and to share his kindness. His demeanor never suggested that this was the end; he always put my well-being above his own.

By Tuesday, we knew the end was near. I lay with him on the floor and gave him all my love while his breathing became more labored. He did manage to get himself up and move to his bed where he laid with his head resting on his favorite toy. I knew that the decision I never wanted to make had to be made and that by morning I would have to say goodbye to my dear friend.

I have always been told that when it is time for an animal to die, they like to be alone and may wander off in private. Knowing this, but still wanting to be close to him, I lay on the floor and listened as his breathing became more and more labored in the next room. Every time he moved I was there to check on him and reassure him that the pain would be over soon. He just looked at me and smiled as if to say, "I know dad, don't be upset".

After a couple of hours Kramer had slowly made it into my room and lay on the floor next to my bed, where he liked to lay while I slept and protect me. I laid down and petted his head while I reassured him what a wonderful dog he was and what a beautiful companion he had been. In one final act of what I can only assume was pure love and devotion, he lifted his head and looked right into my eyes, and as my hand drifted down to rub his chest he breathed his last breath, taking the decision I never wanted to make with him.

Goodbye my dear friend, you will be forever missed. - Dad"