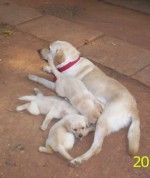 Our Lab Betsy had delivered her litter of four pups and there was an air of anticipation all around. But I was uneasy. Betsy, in her newly upgraded status, presented the perfect picture of motherhood, carefully and fiercely protective of her pups and generally looking at everybody with that serene, tender look that only new mothers seem to have. Tiny furry balls of a mixture of white and fawn, like their mother-they were almost alike in colour and size. Two weeks to go for the pups to open their eyes into their new world, all the while feeding on Mamma's milk and so there was nothing for us to do.

The next development milestone in a puppy's life is when it opens its eyes and starts walking. By the second week, all the pups had opened their eyes but surprisingly their activity level was very low. They would be lying on their bellies, very still, with their hind legs splayed behind them in a very awkward manner. Even to my untrained eye, they looked a sorry, scrawny sight, stretched out on their bellies, with their legs looking spindly and awkward. This was the time when they were still on Mamma's milk - they would be feeding from her, with their bodies stretched on the ground and their faces tilted upwards, furiously sucking and fervently trying to elbow the other to get a bigger share of the milk. But two weeks into their life and with eyes opened- there was no more activity, not even an attempt to sit up. They looked weak and under-sized.

Then the next day, one pup sat up and slowly started walking with clumsy steps. But he was definitely up and about; something which the others were far from even thinking about. In fact, we noticed that the other pups were moving in a swimming-like movement, with their legs paddling sideways! On examination, the vet pronounced that the litter had Swimmers' syndrome." This problem happened to puppies whose leg muscles were weak and chests under-developed and therefore unable to stand-up and walk. I asked him point-blank, "Will they walk?" - a question which he parried with an ambiguous "Chances are fifty-fifty. Let's wait and see". 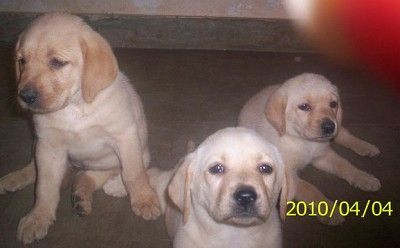 The next week was a whirl of activity on our part - visiting vets and animal hospitals in a desperate attempt to seek a second opinion and the possibility of some treatment. We drew a blank everywhere. In our minds was the unspoken gnawing doubt- would they ever walk normally? If not, what next?

We were into the fifth week of the pups' lives. We decided that we would continue to feed and care for the pups ourselves up to at least the eighth week and hope for the best. We tried every treatment that the Internet spoke of and every vitamin supplement that the vets had prescribed. We made hobbles, injected olive oil and did Physiotherapy on their weak legs. During those days, the Net became my life-line, giving me information on pups with a similar condition: "Most pups recover with time", declared a site but here time was the critical factor. Feeding three pups who could not stand was a tedious job. But one look, at those unblinking eyes and the trusting look in Betsy's eyes would banish all such thoughts from our minds.

Then one afternoon, Pride (he was called thus because of his cute features and the white colour of his coat) managed to stand up and take a few steps albeit clumsily before falling down due to lack of balance and co-ordination! I could not believe my eyes and simply closed them, unable to absorb the enormity of what I had seen. Pride, the pick of the lot had actually stood up and walked. If he could do it, so could the others or so I dared to hope. I prayed as I have never done before. God must have heard my prayer for Squealy started walking in a similar manner the next day! Only one pup still remained in the swimming stage, but our hopes ran high. Pride and Squealy still had a long way to go before they would walk normally and run. Their skeletal system had to tone up but we were sure now that they all would eventually do it, albeit with hiccups. 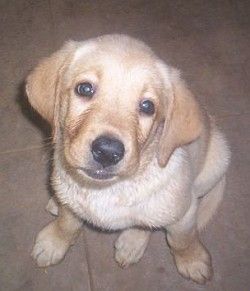 Today, as we have entered the seventh week, Pride and Squealy are almost normal in their gait. Even the laggard is showing signs of improvement. Betsy's litter is nearly as lively and naughty as any other Labrador litter would be and it's a treat watching the pups play. I now have hopes of finding good homes for them. Indeed, Pride, Philip and Squealy went to very loving homes, with plenty of children and space. We have also got feedback that they are very naughty and lively - news which fills me with happiness. When I think back of those dark days when Hope was my only comfort, I can scarcely hold back my tears. The experience improved my sensitivity. I also learnt never to take anything for granted - even the birth of a litter could be quite eventful! Above all, I had saved three precious lives by not giving up on them.