"On September 16, 2008 Andrea, Chad and their dog Copper were driving down an old forest road when an animal, possibly an elk stepped out in front of the car. Andrea did what her father always told her not to do, she swerved. She instantly knew her mistake and told Chad, "hang on, we're going over".

What they didn't realize until daylight was that "over" meant a 150 foot cliff. After what seemed like eternity the jeep finally came to a rest upside down. Andrea was unconscious and covered in blood, the windows were blown out and Copper was missing.

Chad woke Andrea and got her out of the seatbelt, they climbed back up to the road. Chad went down 4 times looking for Copper, he found nothing.

They sat on the service road and built a fire for the night waiting for daybreak. Again Chad went down and looked for Copper and found nothing.

They ended up hiking home as no one stopped to help them. Later at the hospital they discovered that Andrea had 2 broken vertebrae, gashes in her head and 2 lesions on her brain. Chad had 3 cracked ribs. All they could think of was to get out so they could get back to looking for Copper. Copper was, after all, their child.

The next day a car club got together and spent four hours pulling up the wreckage from the gully below. No one saw or heard Copper. They brought squeaky toys and called for him days after the accident. Still nothing. They posted on several sites, hung flyers and even posted on Craigslist four days after the accident. Someone saw the posting and forwarded to a group called Wags to Riches Animal Rescue and Sanctuary in Union Gap, Washington. They had been involved in an eerily similar rescue after a rollover car accident not 30 days before. They found that dog after ten days. It was alive.

Wags contacted Andrea and told her, "Have hope, we will find him".

Four volunteers set out on Sunday, 5 days after the accident. They were told that because no one had seen or heard the dog that this could be a body recovery. But they needed to do it, for the family, so they would have closure and could begin to heal.

Bob, Kim, Chris and Jennifer spread out and went over the cliff to the gully. They methodically started to comb the area. The girls went together and the men went on the outer corners. The brush was so thick that a machete had to be used to make a path. At the bottom of the gully was a small creek. The girls jumped over the creek and went up and around to walk on the other side. One yelled out "Copper". A few minutes later they heard barking. Mama Bear came out and they threw all caution to the wind as they ran and wildly scraped at the branches and brush trying to get to the dog. All the while yelling "It's okay baby we're coming. Good boy Copper!"

When they got to him, he had made a little nest for himself right by the creek. When they realized he was not going to let them put a leash on him they sat down beside him and spoke soothingly to him. Bob drove down to where Andrea and Chad were staying to tell them Copper was found but they needed someone to come and call him to motivate him. In the meantime Chris cut a path through the brush for Copper to go through. 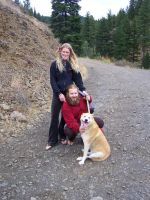 The look on Copper's face when he heard his momma yelling his name! His ears flew back, he barked in reply and stood up to come out of the hiding place. After a bit of confusion, a lot of encouragement and praise, Copper made it up that cliff to his waiting parents. Everyone was crying and hugging. Copper was alive and well.

Standing on that cliff side, looking down, it's hard to believe that all three made it out alive. The love and devotion of a dog, a family's hope and a group's determination had reunited them again.

Sent in by Jennifer Ray of Wags to Riches Animal Rescue and Sanctuary - Union Gap, Washington