A New Home for Freeway 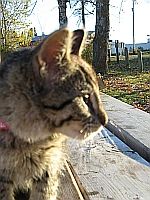 John, Peppy and I had recently moved to a small town in Alberta from B.C. One evening while on an exploration of the area by car I saw something out my window.

I yelled, "John! There is a kitten on the side of the road! Turn around!"

John turned us around but we didn't see the kitten at first.

John then saw her on THE OTHER SIDE. Much to our surprise and delight, the wee thing had crossed the 110 kilometer, very busy highway and SURVIVED.

I hopped out of the car armed with my warm, white sweater.

Frightened, hissing and tearing up the side of the ditch covered in tall grasses, I watched this tiny bundle of fur. I spoke softly, approached slowly and the feline seemed to settle. I picked the scared little package up and was rewarded with a couple of bites and scratches.

Still speaking softly I bundled the ball of fur in my sweater and rocked, as one would a baby. She began to purr.

Stepping back into the car, my husband and our compassionate poodle x Peppy gave the kitten a look over. Her left eye, which I thought was completely missing, was actually just puffy, infected and pus-filled. There was a scratch above her left eye. Chin raw. Pads on paws scuffed.

We drove to a vets office in another small town we had passed & the office was closed. We phoned and waited for an hour for a call back. The vet called with not much to say except to contact the vet in our town. We did this and that vet advised to clean her eye with a warm cloth, and feed her a mixture of wet/dry food, small meals and fed frequently.

So, we arrived back home and did just that. The next day we were heading to a big city so we pet-proofed the car and the whole family went. We stopped at a vet, but since we didn't have an appointment and it was the end of the day, we were advised to keep doing what we did the night before as it sounded as though it was working.

Back home we felt like no one cared. Just a barn cat and yet, we could already see how smart she was. The traumatized kitten had used her make shift litter box, had no fleas, her weeping left eye was slowly weeping less and less and she exuded a trust in us that was humbling.

On the Monday we took her in to the local vet and met the wonderful Doc Kevin. Freeway, ever curious, checked him, his sink, the table and eyeballed the open door to where the rest of the animals were being examined.

The vet told us that considering what she had been through she was in very good shape. I asked him what he meant by that. Dr. Kevin pointed out Freeway's injuries and said they were indicative of a cat that had been thrown out a car window. I gasped and felt an anger building within. Yes, there are actually people who throw cats out car/truck windows and apparently, this is common at this time of year. We were absolutely MORTIFIED.

I said, I have worked with diverse groups of peoples but this would be challenging for me to work with, FORGIVE someone who threw an innocent out the window. Makes me so MAD.

[Here she comes now, watching me on the laptop.]

He also told us she is older than we first thought. Freeway's bones were sticking out when we found her, so she was quite small and fit in the palm of our hand. We considered her about 6-8 weeks but Dr. Kevin, himself surprised, told us she had adult teeth and is likely closer to 4-5 months!

In spite of her traumatic beginnings, we are happy to report that her ear mites are all but gone, her eye has completely healed, she has put on weight since her 2lb weigh in with Dr. Kevin, she enjoys car rides, walkies with Mommy & Peppy, Daddy's head at night, playing hide & seek under Gramma's chair, chasing the broom, giving head butts to us and her brother Peppy, using her scratch post, playing ball and sleeping.

We had so wanted a kitten and we are so grateful for the gift of Freeway and her reminder that no matter what, we can Love and be Loved. 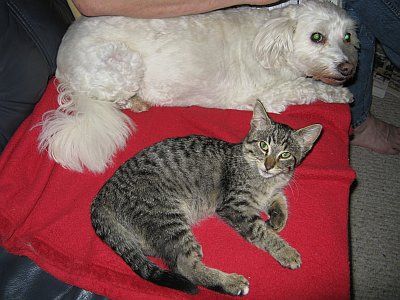 Story sent in by the Sanderson family: John, Leah, Peppy and, of course, Miss Freeway.