Keeping Up With Your Pet's Health: Vaccinate With Rabies Shots 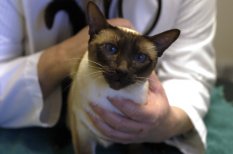 A slow, agonizing virus leading to extreme lethargy, madness, and an eventual, but certain death - doesn't sound very appealing, does it? If you do not vaccinate with rabies shots, your dog or cat faces an uncertain future. Rabies is one of the worst viruses that can affect your pet, and with no preventative measures, such as its annual rabies shots, mortality is, unfortunately, assured. When you vaccinate with rabies shots, you are choosing to extend the life of your pet, protect the community, and follow the letter of the law.

This article may contain affiliate links. When you purchase through links on this site, I may earn a small commission at no extra cost to you.

All pet owners should know that rabies is a disease that is caused by a virus that is transmitted from animal to animal and animal to human via a scratch or bite that causes a break in the skin. The virus is in the saliva of an infected animal. Because rabies is fatal to the animal or a human who contracts it, it is vitally important for pet owners to have their vet vaccinate for rabies with either a one year or three year vaccine. In certain regions and/or states with high levels of rabies reports, such as Texas, Virginia, Connecticut, Georgia, Maryland, Massachusetts, New Jersey, New York, North Carolina, and Pennsylvania (1), you must vaccinate with rabies shots at least once a year.

What Is Rabies Anyway?

The rabies virus is spread through the saliva of infected animals. A huge problem in Asia, Africa, and Central and South America, rabies kills more than 50,000 people and animals worldwide each year; however, most pet owners do not vaccinate for rabies in these regions. Once contracted through a bite or scratch, the virus begins attacking the peripheral nerve cells and central nervous system, which largely consists of the spinal cord and brain (2). The virus works fast, but it is a drawn-out, painful death at best.

Depending upon where the animal was bitten, it may take awhile for symptoms to show. Without any preventative rabies shots, the symptoms begin to appear and the animal normally only has a week to a week and a half to live. Contraction of the rabies virus in animals is broken down into three phases: prodromal, furious, and paralytic (3). During the prodromal phase, the dog or cat will show signs of apprehension and anxiety as well as develop a fever, although cats often exhibit more irregular behavior. The furious phase sees cats and dogs highly irritable, more vicious, and lashing out at anything that moves. The paralytic phrase can occur after either the prodromal or furious phases - breathing becomes more labored and vital organs freeze up. There have been stories of pet owners trying to dislodge a foreign object from the animal's mouth because they were unaware that the dog had contracted the rabies virus. The animal eventually lapses into respiratory failure and dies (4). When you vaccinate for rabies, you help your dog or cat avoid all of this pain and suffering, which can easily be prevented with annual rabies shots - quickly and rather inexpensively.

Animals most at risk for exposure to rabies are stray dogs and cats that frequently roam in and around wooded areas that bring them in close proximity to wildlife that are the carriers of rabies. Wildlife carriers often include raccoons, foxes, coyotes, skunks, and bats.

Pet owners should also be cautious by avoiding contact with wildlife that are normally nocturnal (active at night) and are normally fearful of and avoid contact with humans. Rabid wildlife are not fearful of humans and may aggressively attack. Be careful of leaving food outside for cats and dogs, which tends to attract wildlife and brings them up close and personal with our pets. Also, be careful about approaching cats and dogs that appear to be feral or roaming about. One bite or scratch is all it takes for exposure to rabies to occur, and if the animal that bites cannot be captured, prophylactic treatment for rabies may be necessary. Unfortunately as well, any preventative measures in the form of rabies shots are far too late to be administered at this point.

It is also vitally important to report all animal to animal and animal to human bites to the animal control agency in whichever county or area the bite occurs. Many people are reluctant to do this if the offending animal belongs to a neighbor or someone they know. However, if the vaccination history of the dog or cat that bites is not known, then the animal or person bitten is at risk for exposure. Pets should be safely confined and dogs should be on leash when off their property. Finally, once you vaccinate for rabies, make sure your pet wears its rabies tag at all times.

Rabies shots for dogs and cats are required by the law for the life of the pet. Neglecting to keep you and your family, your pet, and your community safe from rabies is a costly mistake and one that should never be allowed to occur. You have the power to vaccinate your pet from this easily preventable virus. Remember, keeping up-to-date and choosing to vaccinate with rabies shots is the first line of defense to keep the public safe from this deadly disease.

Reprinted with permission.
Dr. Gloria Dorsey, DVM, MPH, and Director of Medical Services at the Atlanta Humane Society, received a Master's of Public Health Degree in Epidemiology from the University of Alabama at Birmingham and is a graduate of Tuskegee University School of Veterinary Medicine. Dr. Dorsey has worked for the non-profit animal charity and pet adoption organization for over 12 years.